Add a Description To Your Tests

By popular demand, test configurations now have a “description” field, where you can document the scope or purpose of your test. No more “LongTestNameTryingToTellTheWholeStory” required! 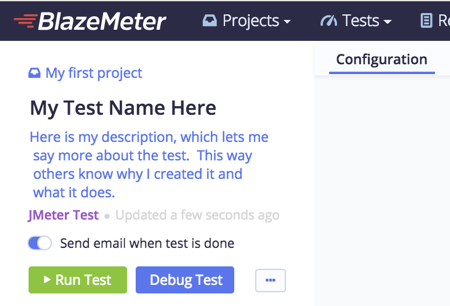 We’ve listened to feedback from our single sign-on (SSO) customers who wanted greater control over new user accounts and no more “pile up” of new users in the default workspace.

Our integration with Dynatrace is now bi-directional!  You’ve always been able to send “red dye” (decorated headers) outbound to make test traffic easy to see in Dynatrace and now you can pull Dynatrace metrics inbound to visualize in Timeline Graphs. This is also the debut of Dynatrace support in our new test create (NTC) screens. We’ve made this new functionality available in both our legacy and new test create (NTC) screens.

Look for “Import swagger file” in the (...) menu at the bottom of the Scenario list box: 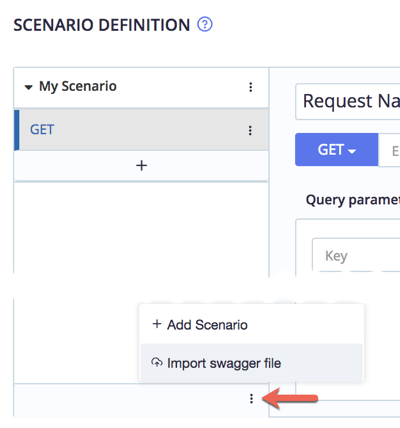 Have a look at API Functional Test.  Since our public release last sprint, we’ve been very busy:

We will deprecate JMeter versions <2.13 on April 29th.  When we do, we’ll switch to executing these older scripts with the 2.13 engine.

Usage reports now include an “Execution Client Id” column so you can see at a glance whether test was run from UI, API, Taurus, Jenkins, etc...

Learn more about the Bamboo plugin for BlazeMeter:

Use our new intuitive UI to create API Functional Tests with or without writing code. Templates for authentication, variable extraction and dozens of other use cases make it fast and easy, whether writing your first test or your 100th.

Prefer to write code? Toggle between the UI and code editor with a click.

If you already have JMeter scripts or Taurus YAML scripts, just upload and run them to get detailed functional test results. Watch the animation below or read the help topic to learn more.

If you have an unlimited plan, you can now see how many parallel runs are operating across all workspaces in your account.

Report screen commands: look for new icons instead of buttons

In the report, we have converted the “Compare” and “Summary” buttons into icons, joining the Accessibility, Share, Refresh and Delete buttons which became icons a few releases back.

From today forward, you’ll see these icons and hover tooltips:

We will deprecate JMeter versions <2.13 in April.  When we do, we’ll execute these older scripts using the 2.13 engine.  Now is a great time to check to see if your <2.13 scripts need edits to run on 2.13.  JMeter is great at backward compatibility, but better safe than surprised :-)

The Chrome recording extension has been upgraded:

Overlay your own data on the Timeline Report (coming soon!)

Ever wish you could overlay your own time-series data on the BlazeMeter Timeline Report? We’ll be releasing an API soon which lets you post JSON data to overlay on any test, even in real time. Watch for an update in the next release or drop a line to beta@blazemeter.com if you want to get started right away.

The time-series resolution in the Summary report graphs now changes at the 5-minute mark:

Starting today, when you press the “Taurus” test create button, you’ll go to the New Test Create (NTC) screen being rolled out as part of our New Test Create Beta.  For advanced users who have been running Taurus tests on BlazeMeter for some time, you’ll be interested to hear that the default execution framework is moving from “Taurus V1” to “Taurus V4” with this update.

We’ve been gradually rolling out a new test create workflow and underlying test execution architecture since earlier in the new year. Here’s a peek at what we’ve added in the most recent drop.  If you have questions about the beta (including requests to join the beta and try it out so you can influence our final builds), please drop us a line at beta@blazemeter.com.

The Debug Test button launches a quick run of your test at low scale to confirm that everything works from the cloud. Unlike the “sandbox test” feature in the previous version, with Debug Test, your settings (such as scale, location or duration) aren’t changed or reset in any way. We also write out a more detailed “trace.jtl” log for these runs to assist with troubleshooting.

When you upload a file in New Test Create, we validate the uploaded file, checking for:

The validation occurs automatically on file upload and you can re-validate on demand by clicking the “Revalidate” after making corrections/uploading new files.

You asked. We listened.

Sometimes it’s the little things that matter the most. This week we implemented two requests that were recently posted as feature requests on the Ideas Portal:

Long labels truncated? Just drag the column wider to see it all.

When you click on project name, it navigates you to the list of tests in your project.