How to Use the Inter-Thread Communication Plugin in JMeter

In addition to removing/not removing items from a queue, another difference between fifoGet and fifoPop is that fifoGet doesn’t wait for data in the queue and will return an empty string if no data is present. fifoPop waits until a thread puts some data into the queue.

The official page of the Inter-Thread Communication plugin can be found here. On the page we can find helpful information and download the plugin. If you need help with installing plugins you can find that information here: How to Install the JMeter Plugins Manager.

We will create a simple JMeter script to demo the Inter-Thread Communication plugin. I have chosen the BlazeDemo website to create our load script and run tests. This is a demo website that allows us to search flights. We will create a demo script with two Thread Groups. The script will collect departure and destination cities in one Thread Group and pass this information to another Thread Group, by using the Inter-Thread Communication plugin components.

This Thread Group will be used for collecting information.

2. Add an HTTP Request, which opens the Blazedemo website.

This sampler makes a request to the landing page of the BlazeDemo website. This page contains two selectors with departure and destination cities respectively.

3. Add an XPath Extractor to grab a random departure city.

The Xpath Extractor will extract the name of a random departure city from the proper selector and store it in the ‘departure_city’ variable.

The Inter-Thread Communication PostProcessor will take the value from the departure_city variable and put it in the departure_queue queue.

5. Add another Thread Group to the Test plan.

This sampler will be used to present the accepted values.

8. Now it is time to read a value from this variable. 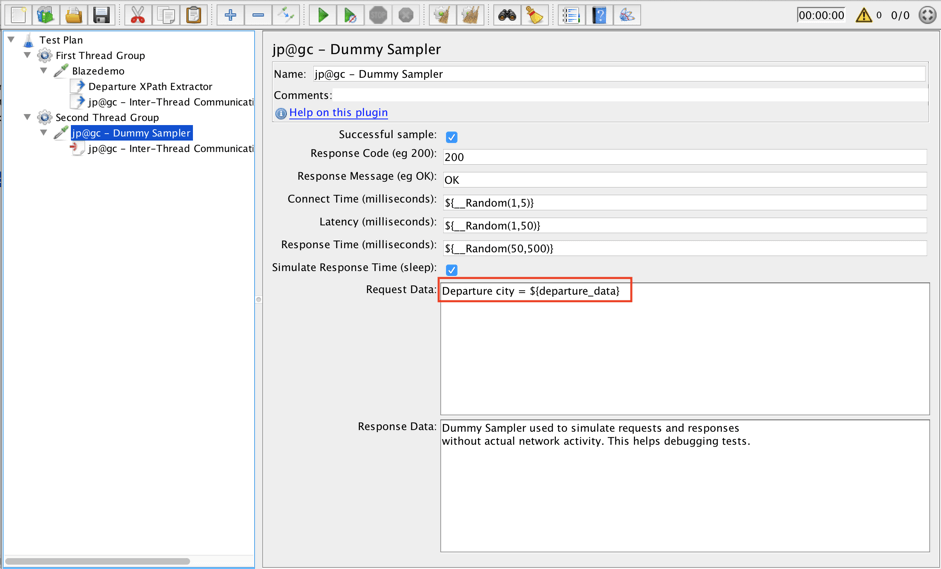 Change the default value of Request Data to the ‘Departure city = ${departure_data}’.

9. Add a View Results Tree listener to see the results of the tests.

This listener will collect requests from both Thread Groups.

Great! We took a look at passing information from one thread to another with the Inter-Thread Communication PostProcessor and PreProcessor.

But there is another way to do it! For an alternative approach we will use functions. Functions can be used for any type of JMeter element that enables writing script. Let’s look at an example.

11. Add an XPath Extractor to grab a random destination city.

This XPath Extractor will extract the name of random destination city and store it in the ‘destination_city’ variable.

This is kind of a trick. This assertion will not fail the Blazedemo request, but will execute the fifoPut function instead. So the destination_city value will be put in the destination_queue queue.

13. Update the Dummy Sampler to check how the functions work. 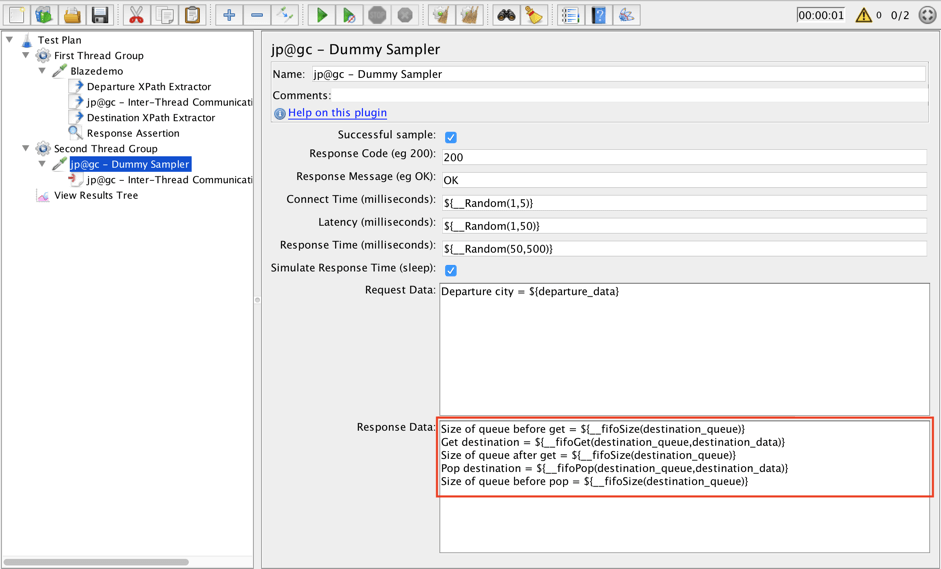 So! In this blog post we took a look at the Inter-Thread Communication plugin as well as all of its elements and functions. Feel free to use it in your advanced scripts for your own purposes. I hope this blog post will help!

Running Your JMeter Test in BlazeMeter

After setting up your JMeter script, run it in BlazeMeter. You will be able to massively scale your test, get advanced reporting and collaborate on tests and reports.

Try out BlazeMeter by putting your URL in the box below, and your test will start in minutes. Or, request a performance testing demo from one of our engineers.