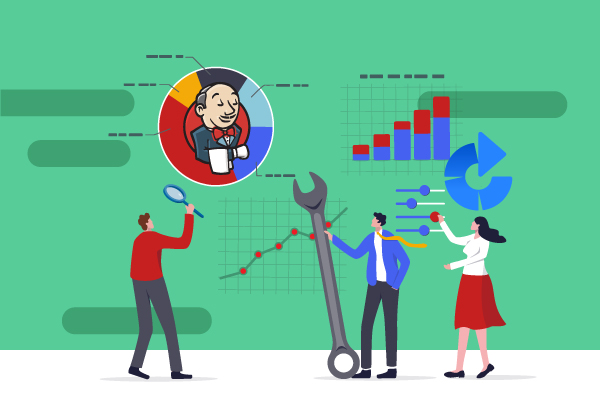 Jenkins vs. Bamboo: Battle Of The Best

Jenkins and Bamboo are both popular continuous integration (CI) tools in their own right — but which one is the best?

This blog will compare Jenkins vs. Bamboo to help you decide which solution is the best fit for you and your team.

What's the Difference Between Jenkins vs. Bamboo?

The main difference between Jenkins and Bamboo is that Jenkins is open source while Bamboo is a commercial product from Atlassian. Keep reading to learn more about the differences.

Jenkins is an open-source Java-based automation platform with plugins for Continuous Integration. Jenkins is used to automatically create and test your software projects, making it simpler for developers to incorporate changes and for users to acquire a new build.

Jenkins is the ideal option for early-stage businesses because of its open-source nature and free usage. Multiple growth companies also prefer Jenkins since it enables automated software product development. Jenkins is available for use on various platforms, including Windows, macOS, and many versions of Unix, including openSUSE, Red Hat, and Ubuntu.

Jenkins is flexible and has a flourishing community of plugins. Jenkins plugins facilitate the integration of many DevOps phases. It operates weekly and LTS (Long Term Support) release schedules, similar to other widely used open-source projects.

Bamboo Server is also a widely used Continuous Integration tool (CI). It was created in 2007 by Atlassian, a company well known for its project management software, Jira. Bamboo is a commercial tool that enables the automation of builds, tests, and releases in a unified workflow.

With Bamboo's seamless integration of Jira and Bitbucket servers, you have end-to-end insight into release, implementation, quality, and status. Additionally, it has integrated deployment support, automatic merges, and Git branching. Bamboo encourages extending and combining on a predetermined schedule. It is accessible on various operating systems, including Windows, Mac OS X, and Linux.

A Quick Comparison: Jenkins vs. Bamboo

When these tools are compared based on popularity, Jenkins clearly wins and is far more popular than Bamboo. Jenkins was introduced far earlier than Bamboo, and it quickly received attention among enterprises. Because of this, and its open source nature, it is more popular and used among developers.

Additionally, if you examine the current Google Trends for these tools, it is evident that Jenkins is much ahead of the competition. Jenkins continues to lead the continuous delivery pipeline market solution

Bamboo is a commercial/licensed tool, while Jenkins is an open-source tool. As a result, Jenkins has a worldwide development community, whereas Bamboo has its specialized development team. Thus, any individual or professional involved in DevOps can download Jenkins.

To get started with Bamboo, you can download a 30-day free trial edition. Following that, you can purchase a subscription for $1200, including unlimited jobs with one remote agent. Please remember that the more extensive the plan, the more agents you will need. Otherwise, you risk developing a process and then slowing it down.

Jenkins is simple to install since it is a self-contained Java application that can be launched immediately. Java must be installed on the target system, which is relatively simple to do. Jenkins supports JDK8 and has started supporting Java 11 environments in recent releases.

Once deployed, a basic online interface is used to run configuration checks. Jenkins is available for Windows, Mac OS X, and the familiar flavors of Unix. Jenkins may also be launched as a servlet in various Java servlet containers, like GlassFish or Apache Tomcat. On the other hand, Jenkins lacks hands-on help but has a sizable community that can assist you with concerns. This is justified since it is an open-source utility.

Bamboo's installation and configuration process is more complicated than Jenkins'. As is standard, Java must be installed on your workstation, followed by creating a specific user for running Bamboo. Here, a home directory must be established, after which the Bamboo server could be started and configured according to your preferences. While the installation process may be lengthy, you will find Bamboo's user interface to be more user-friendly.

Jenkins and Bamboo both perform well in terms of simplicity of installation and configuration of their respective CI/CD solutions. This characteristic is equally subjective to evaluate since your requirements determine it.

Jenkins and Bamboo both provide scalability through a RESTful API. If you want to link your application with the Bamboo server, you may utilize the Bamboo REST APIs. It may also be used by administrators who want to have their scripts communicate with the Bamboo server. While JSON is the default answer format, there is an option to request XML instead.

Jenkins provides remote-access APIs in Python, XML, and JSON. As with Bamboo APIs, Jenkins APIs may be used to initiate a new build, start jobs, and retrieve consumption-related information from Jenkins.

When it comes to user-friendliness, Bamboo far outclasses Jenkins in the Bamboo vs Jenkins comparison. Bamboo's user interface is pleasant and straightforward, and it can be modified to the customer's specifications. However, it is entirely up to you how you approach these tools. Once you begin using Jenkins, you will quickly understand that their major focus is on functionality, with usability as a secondary concern.

Bamboo gives precise information on the build and deployment progress for each new job. With regards to Jenkins, developers can make use of the plugin ecosystem to modify the experience to their specific needs.

When deciding which CI/CD solution is superior to Bamboo versus Jenkins, you'll need to find a balance between capability and user-friendliness.

Plugins extend the capability of CI/CD systems, but you must be selective about which ones you use. Jenkins growing plugin ecosystem has a significant advantage over Bamboo. Jenkins is open-source, which means that the worldwide community is active and contributing, as seen by the abundance of plugins. At the moment, there are over 1,500 community-contributed Jenkins plugins that assist with project development, DevOps testing, deployment, and automation.

On the other side, the Atlassian marketplace has almost 200 Bamboo plugins (or add-ons). The Bamboo server's primary USP is its built-in integrations with Bitbucket, Jira, and Confluence.

Since Jenkins is more functionality-centric (through plugins), modification is more cost-effective, which effectively eliminates the need for expensive in-house customization. Jenkins plugins are light years ahead of the competition due to their sheer volume.

Bamboo is exclusively accessible on-premises; the cloud version was phased out in early 2017. Although BitBucket pipelines were used to replace the service, no substitute could equal the Bamboo cloud.

On the other hand, Jenkins is accessible in both cloud-based and on-premise configurations. Jenkins is ideally suited for cloud-based deployments of self-hosted pipelines. If you want to utilize an on-premise form of Jenkins for DevOps testing or development, Architecting for Scale with Jenkins is a helpful reference. Jenkins offers an obvious advantage over other cloud-based CI/CD systems.

Bamboo is pre-integrated with Jira and Bitbucket. These integrations contribute to total transparency about the deployment, quality, and status of releases. Bamboo is currently only available on the Windows, Linux, Solaris, and macOS (or OSX) operating systems. Additionally, it supports AWS. The Bamboo Server EC2 Wizard can have the Bamboo server up and running on AWS within a few minutes.

On the other hand, Jenkins allows interaction with a variety of cloud systems, including VMware vSphere, Amazon EC2, and Google Cloud. Plugins may be used to accomplish the integration. You can learn more about it in the Jenkins Plugin for Integration's support docs.

Jenkins and Bamboo both offer parallel builds. According to the Bamboo server, each stage by default contains a single task; however, it can group many jobs. Bamboo requires the presence of multiple agents to execute tasks in parallel. Each stage must perform its assigned tasks before proceeding to the next stage in the plan.

On the other hand, Jenkins parallelism is defined by its pipeline.

Additionally, the Parallel Test Executor plugin assists you in separating identical test units, which are eventually converted to an exclusion list. However, Jenkins supports only partial parallelism for DevOps testing since the builds share the same environment. This element might create complications when a shared resource, such as a filesystem, is employed.

Parallelism with Bamboo and Jenkins for DevOps testing works as expected, and there is no obvious winner in the Bamboo versus Jenkins battle for this aspect. 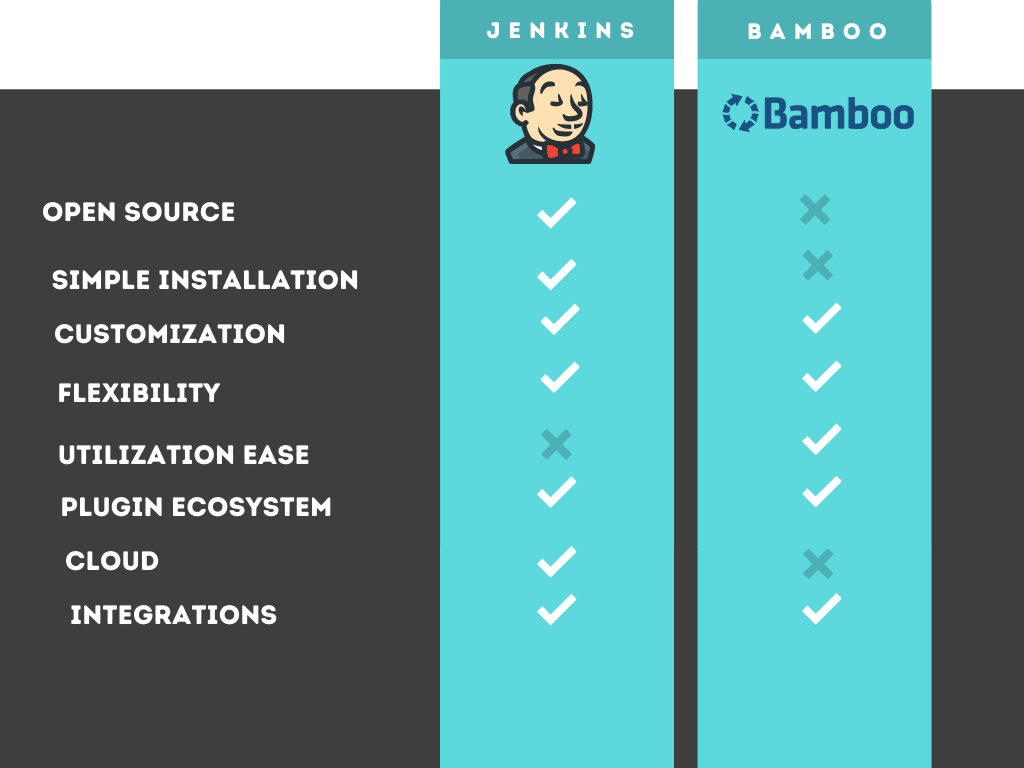 Both Jenkins and Bamboo are well-known and crucial in the DevOps field. As a result, you can choose between the two. However, before you choose a tool, there are some critical factors to consider. Review each tool and evaluate them according to the following criteria:

In short, I would suggest that it is entirely up to you to choose which tool to use depending on your DevOps requirements. Thus, these are the critical considerations while deciding between Jenkins and Bamboo.

BlazeMeter enables running performance testing in CI/CD pipelines, with both Jenkins and Bamboo. 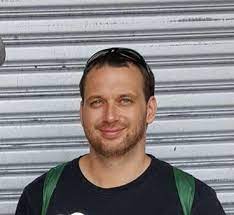 Igor is an entrepreneur and educator with a background in marketing and data science. His passion is to help small businesses and startups to utilize modern technology for growth and success.