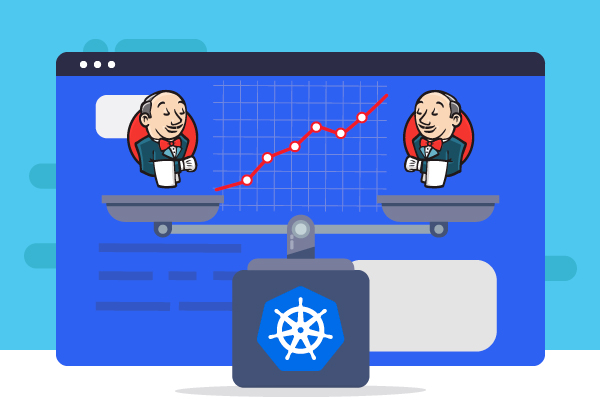 Jenkins + Kubernetes: How to Set Up Jenkins on Top of a Kubernetes Cluster

When Jenkins instances grow quickly as part of your CI server, teams can suffer from redundant resources consumption and slowness of the delivery pipeline. Is there a way out of this situation? Sure there is, and the answer is simple — scalability.

This step-by-step guide will show you how to scale Jenkins with Kubernetes by setting up Jenkins on top of a Kubernetes cluster. Read along or skip to the section that interests you most.

📕 Related Resource: Learn more about How to Scale Selenium Tests in a Kubernetes Cluster

Why Scale Jenkins With Kubernetes?

The best way to scale Jenkins is on top of Kubernetes. Kubernetes, an open source containers orchestration tool offers a lot of flexibility. This capability makes it one of the best tools to manage scalable solutions.

Scalability is a measure that shows the ability of a system to expand its capabilities to handle an additional load. One of the strongest sides of Jenkins is that it has a scaling feature almost out-of-the-box. Jenkins scaling is based on the master/slaves model, where you have a number of agent instances (called slaves) and one main Jenkins instance (called master), which is responsible mainly for distributing jobs across slaves. Sounds simple right?

Well, even if the scalability feature is available in Jenkins out-of-the-box, this doesn’t mean that the process of making Jenkins scalable will be fun and easy. First, it will be challenging, after that it will be hard and only then will it be fun, when you will finally see the number of slaves that are coming on board each time you run your builds.

📕 Related Resource: Learn more about Jenkins + Selenium: How to Setup and Run Tests

If you are trying to keep up with trends you should have definitely heard about Kubernetes, whose popularity is growing in huge steps, day by day. You might be surprised about how fast Kubernetes’s popularity pattern has been growing, if you try to compare it with similar containers orchestration tools like Docker Swarm (Docker's first container orchestration project):

So, how can Kuberenetes help us with scaling Jenkins?

Kubernetes is one of the best tools for managing scalable solutions. Practically anything can be placed inside the containers. Jenkins can be as well, and that’s why it makes Kubernetes a very nice option to use for our needs.

However, Kubernetes is not a tool that you can just install in an evening and wait for it to solve all of your problems. It's more like a way to build and deploy your software in general. In fact, it changes the usual ways we have been deploying our applications until previously. But you definitely shouldn’t go there just because it is a trend. Instead you should clearly understand which exact problems Kubernetes would help you resolve and which efforts you would have to spend to make it happen. But this is a question for a separate article. Our article is mainly for those who suddenly started using the Kubernetes cluster or are maybe going to use it sooner or later.

As already mentioned, this article will help you implement a Jenkins scalable infrastructure on top of Kubernetes, in which all the nodes for running the build will spin up automatically during builds execution, and will be removed right after their completion. This article will assume that you have a basic understanding of containers and Docker, which are definitely “MUST HAVE” prerequisites for those who decided to try Kubernetes.

How to Use Jenkins + Kubernetes

If you want to use the Kubernetes platform for test purposes (definitely not to run the production load on this setup) then you can use the Minikube tool, which has been developed to run a single node Kubernetes cluster on your local machine. The installation is very simple but you should have the VirtualBox installed on your local machine. If you have a UNIX platform, just use this command to install Minikube.

To run the Minikube after its installation:

To confirm that Minikube is up and running:

Also, we need to install the Kubernetes command line interface for the cluster configuration from the console. You can install it by using the specified command:

The best way to install the Jenkins master is to create your docker image based on the base Jenkins image, which you can find in the official docker repository (keep in mind that Docker should be installed on your local machine). For this, you need to create a dockerfile. Having your Jenkins setup as a dockerfile is highly recommended to make your continuous integration infrastructure replicable and have it ready for setup from scratch. So let’s create our first example dockerfile for the Jenkins master:

We are not going to give detailed instructions on how to write dockerfiles.

Most of the plugins we installed here were just to show you an example. You can install additional plugins just by adding similar commands inside your dockerfile. But one of these plugins is critical for our article. As you might guess, it is the ‘Kubernetes’ Jenkins plugin. This plugin is designed to implement Jenkins on top of a Kubernetes cluster.

This command doesn’t show any output after execution so if you didn’t get any errors then everything should be fine. To build a docker image based on the dockerfile you created, all you need is to run this command from the same folder where you have created the dockerfile:

After the build process is finished, let’s verify that the newly created image is there:

Congratulations! Your master Jenkins image is created and can be used inside your Kubernetes cluster.

Kubernetes deployment is presented in a YAML format text file with all the configuration params that might be needed to run your application. Let’s have a look at the basic deployment configuration that is required to run Jenkins inside Kubernetes:

Let’s go over the main options inside this deployment file:

Let’s install the just created deployment into our Kubernetes cluster by using the specified command:

There is one more very important term inside Kubernetes that you need to be aware of, and it's named ‘Pod’. A pod is the basic building block and the smallest unit in the Kubernetes cluster. Once you perform a deployment, it creates a pod. I highly recommend going over the Pod overview if you want to get more ideas about the pod and its place inside the Kubernetes cluster.

As each deployment should create a pod, let’s verify that we have a newly created pod for the just applied deployment for our Jenkins. By running this specified command, you can get the status of the Jenkins pod and the screenshot below shows you an example of a successfully deployed pod:

In addition to pod creation via deployment, we need to create the Jenkins service. The reason behind this is simple. To interact with a pod inside the Kubernetes cluster you need to know its IP address and in theory, we can interact with a pod directly by using its own IP address. But what if a pod goes down? One of Kubernetes’s main features is to handle such cases, and it should create a new pod instead of the one that went down. As it is a new one, it should get a new IP address.

So how we can still maintain a persist connection to the pod while its IP can be changed? This is when the Kubernetes service comes into play. The service defines an abstraction between the outside world and the pods themselves, and provides you with access no matter what. This means that it handles all the communication within a deployment.

To create the service we need to define such a yaml file:

The main options inside this service file:

As soon as you have created the service file, you can run it inside the Kubernetes container by using this command:

Now we have finally created the deployment and the service, and that’s basically it! Let's open the Kubernetes dashboard and verify that it is there for real! All you need is to execute this command in the command line:

This command will open the browser for you with the Kubernetes dashboard, where you can navigate to the ‘Overview’ section and find that your ‘jenkins’ deployment and pod are there: 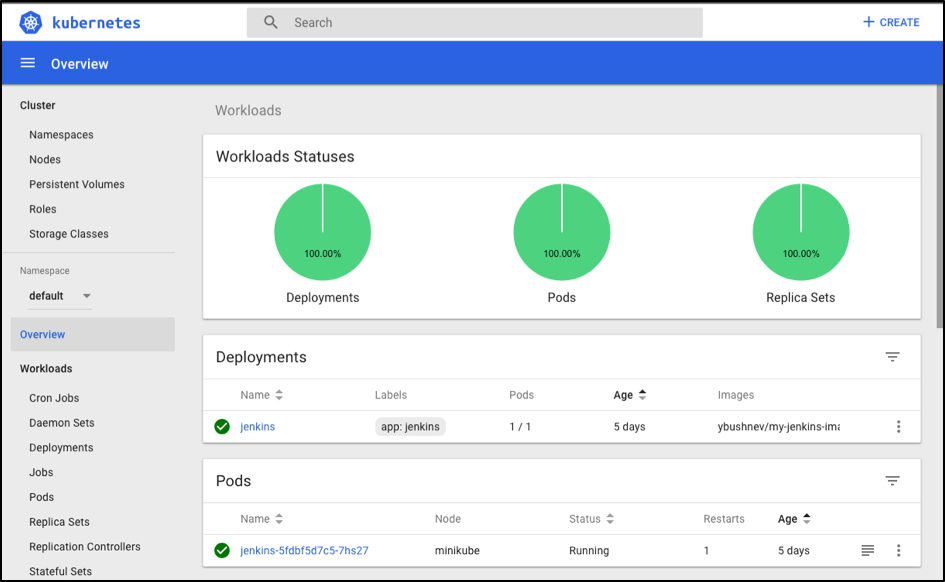 In addition to that, if you go into pod itself, you can find master Jenkins logs, which might be very useful for you if you get an unexpected issue during your Jenkins CI usage:

As a final verification that our Jenkins master is installed, let’s try to open Jenkins UI. First of all, we need the port that the Jenkins service extends outside the Kubernetes cluster, which can be used to access the Jenkins setup. You can get the port number by using this specified command:

In addition to that, you need to know the IP of the Kubernetes cluster itself. You can get it by using this command:

Now it’s time to configure Jenkins slaves. As you might remember, we installed the Kubernetes plugin using the master dockerfile so we don’t need to install anything separately and the required plugin should be already there.

The Jenkins pod URL post is standard - 8080, and you can get IP address in only a few steps. First, you need to get the Jenkins pod id, which is the value of the output provided by this command:

Second, you need to run the command that describes the pods passing the pod id as an argument. You will find the IP address in the output:

Now, we are ready to fill in the Kubernetes plugin configuration. In order to do that, open the Jenkins UI and navigate to “Manage Jenkins -> Configure System -> Cloud -> Kubernetes” and fill in the ‘Kubernetes URL’ and ‘Jenkins URL’ appropriately, by using the values which we have just collected in the previous step: 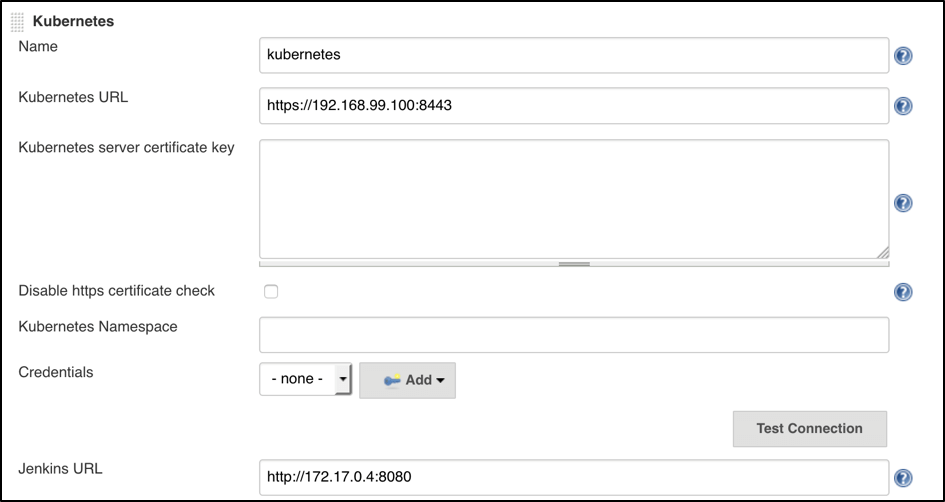 In addition to that, in the ‘Kubernetes Pod Template’ section, we need to configure the image that will be used to spin up the slaves. If you have some custom requirements for your slaves, you can build one more dockerfile with the appropriate changes the same way we did for the Jenkins master. On the other hand, if you don’t have unique requirements for your slaves, you can use the default Jenkins slave image available on the official Docker hub repository. In the ‘Kubernetes Pod Template’ section you need to specify the following (the rest of the configuration is up to you): 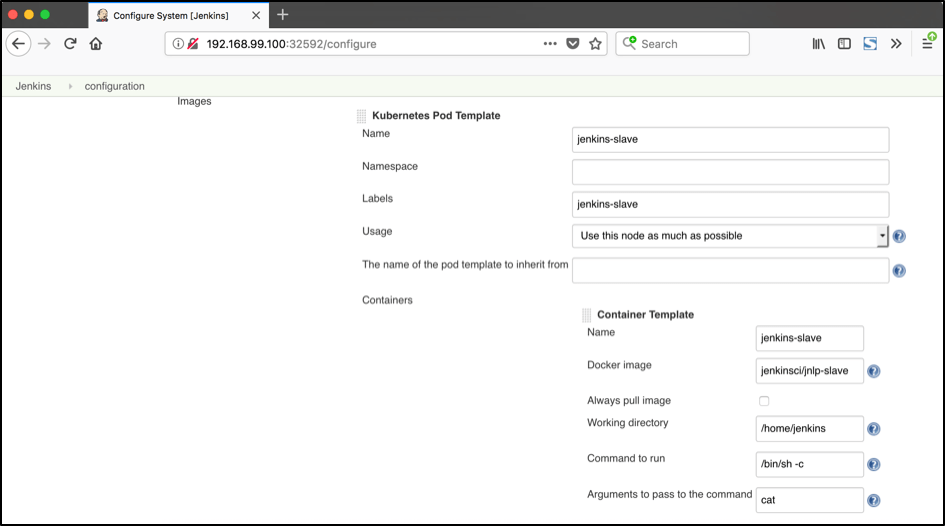 Now all the configuration seems to be in place and we are ready for some tests. Let’s create two different build plans with one step that simulates a timeout (let’s say 30 secs) just to have a long running operation:

Now let’s trigger the execution for both of the builds. You should see that both build plans appear in the ‘Build Queue’ box almost immediately:

If you applied the correct configuration in the previous steps, you should see that you have two additional executors and both have the prefix ‘jenkins-slave’, in just 10-15 seconds. This means that these nodes were automatically launched inside the Kubernetes cluster by using the Jenkins Kubernetes plugin, and, most importantly, that they were run in parallel: 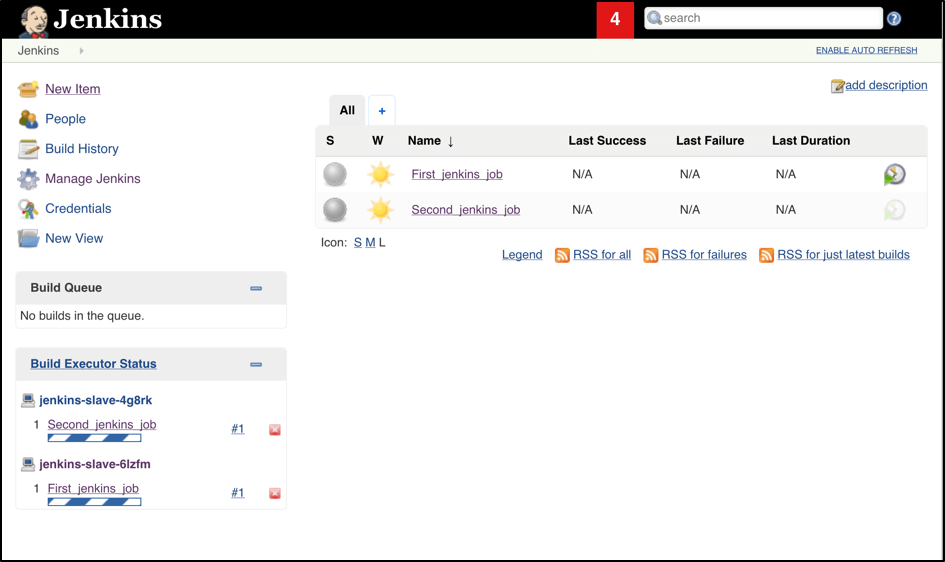 Also, you can confirm this from the Kubernetes dashboard, which will show you a couple of new pods: 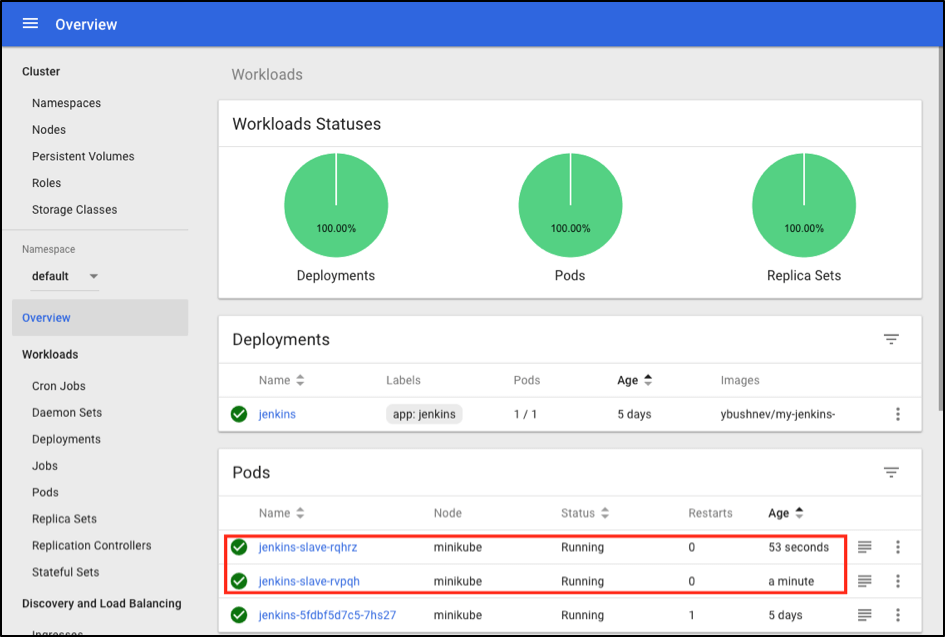 After both builds are completed, you should see that both build executors have been removed and are not available inside the cluster anymore:

Congratulations! You have just seen the true power of Jenkins auto-scaling inside the Kubernetes cluster! Jenkins can be used for adding all of your tests, including your load tests, to the Continuous Integration.

This blog was originally published on March 5, 2018, and has since been updated for accuracy and relevance.