Apache JMeter™’s Dummy Sampler simulates requests to the server without actually running the requests, serving as a placeholder or to mimic other samplers. The sample is generated with the values defined in it and it is also very convenient for debugging and testing of assertions and post processors, but isn’t limited to only these scenarios. I personally find it very useful and use it a lot during script development in JMeter.

To use the Dummy Sampler, install the Dummy Sampler plugin which happens to be number 4 in the Top Ten JMeter plugins list. To download the plugin you can head on over to the official page found here. If you need help installing plugins you can find that information here: How to Install the JMeter Plugins Manager.

Let’s take a look at the structure of the Dummy Sampler. 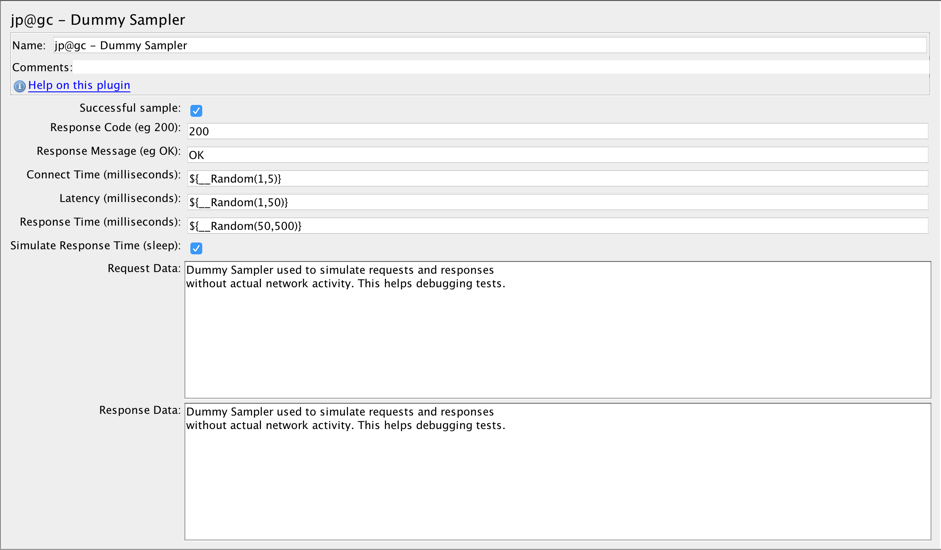 Below is an example of a Dummy Sampler execution. 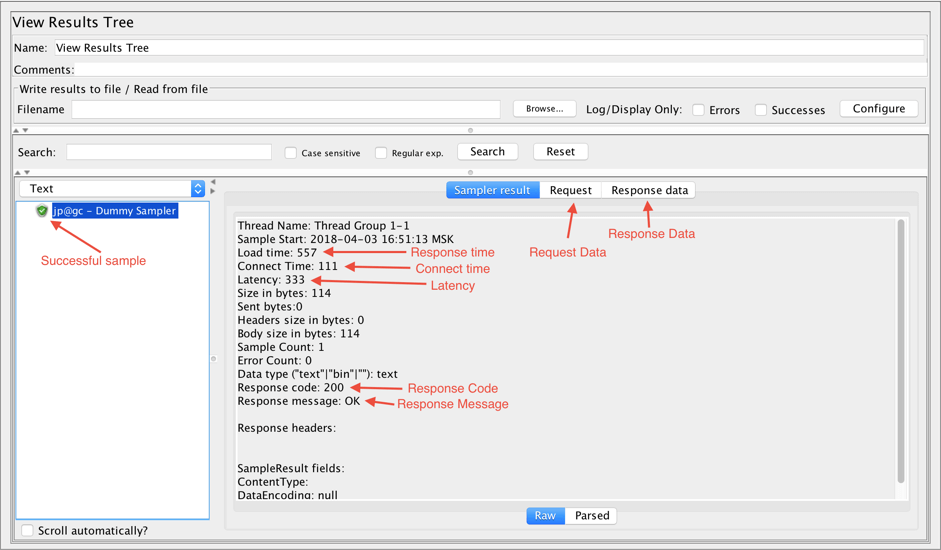 Now it is time to try the Dummy Sampler in action. Let’s create a simple script and then mimic it using Dummy Samplers.

Creating a JMeter Script with the Dummy Sampler

I chose the BlazeDemo website to create our performance script. This website is available to anyone who wants to play around with JMeter.

2. Add an HTTP Request that opens the Landing page.

3. Add another HTTP Request that makes a search for flights.

4. Add a listener to see your test results.

Check all three tabs of requests in the listener. All tabs contain the proper data according to the requests we made.

Time to mimic a real script.

6. Add a Dummy Sampler to simulate the Landing page request.

7. Add another Dummy Sampler to simulate the Search request. 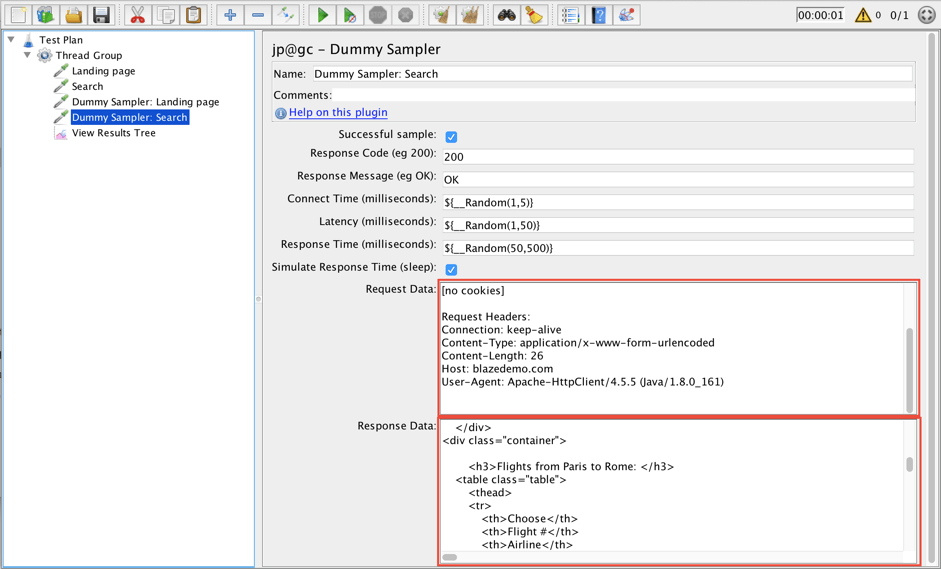 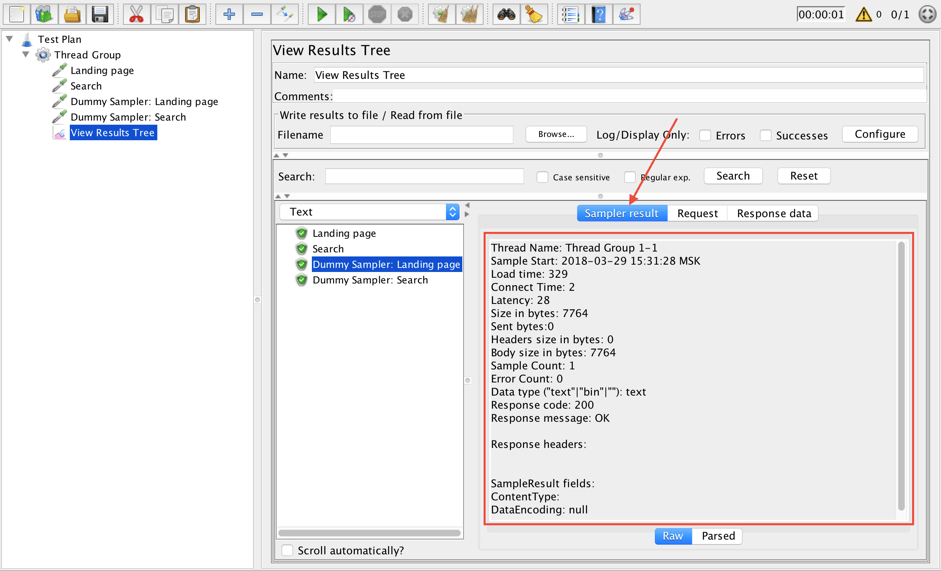 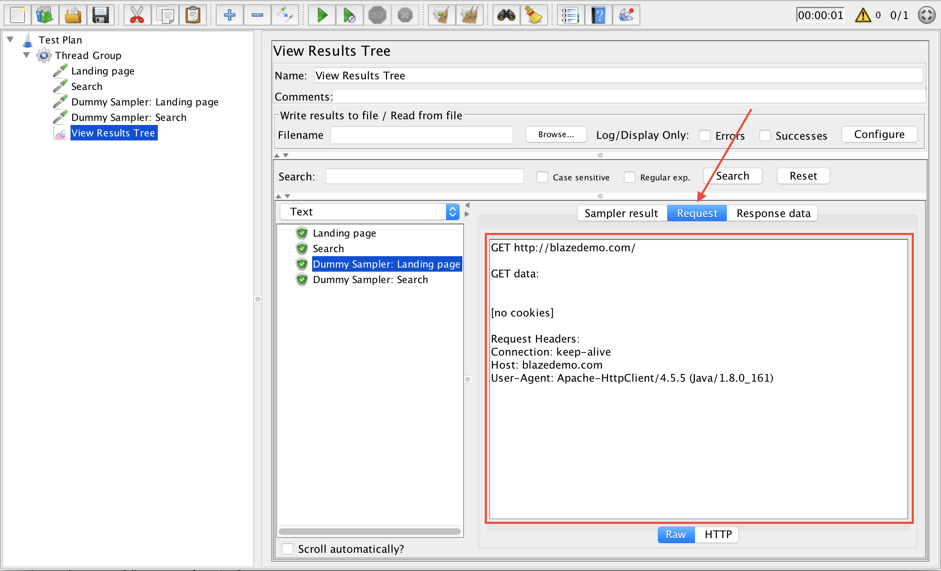 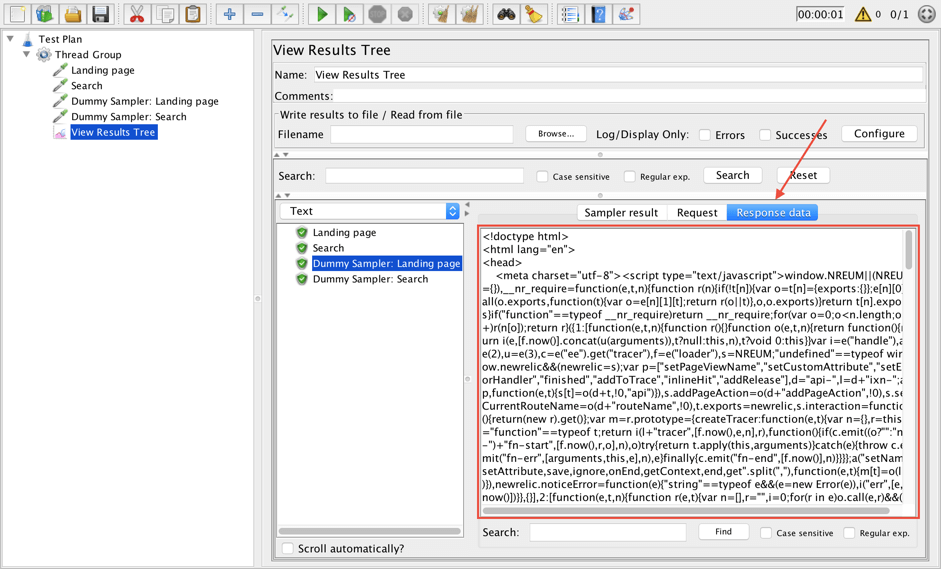 The dummy samplers look pretty similar to the real requests. Great! We were able to mimic a real script with dummy ‘requests’. These requests don’t perform real calls on the server, so we can work with this script even when we have problems with our internet connection or server availability.

Debugging, Assertions and Post Processors with the Dummy Sampler

Another common usage of dummy samplers is debugging and testing assertions or post processors. Let’s take a look at that below. 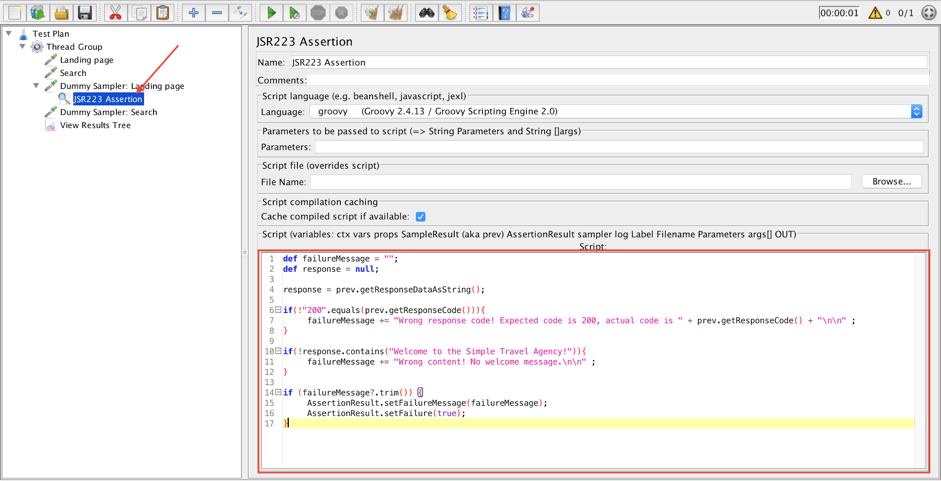 This Groovy script checks for a response code of 200 and for the text “Welcome to the Simple Travel Agency!” on the page. Here is some more info about JSR223 Assertions and how to Script JMeter Assertions in Groovy.

10. Start the script and check the results. 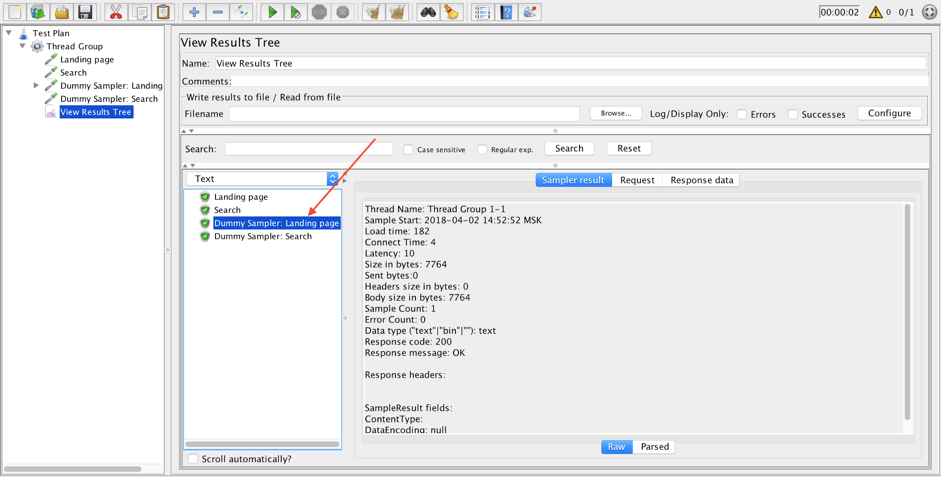 Now, you can work with the Dummy Sampler and JSR223 Assertions to develop more complex Groovy scripts. This is very convenient since you don’t need to run a whole script to try your assertion. Execution of dummy samplers is very quick and stable.

We took a look at how to use assertions with Dummy Samplers. Now it’s time for post processors. 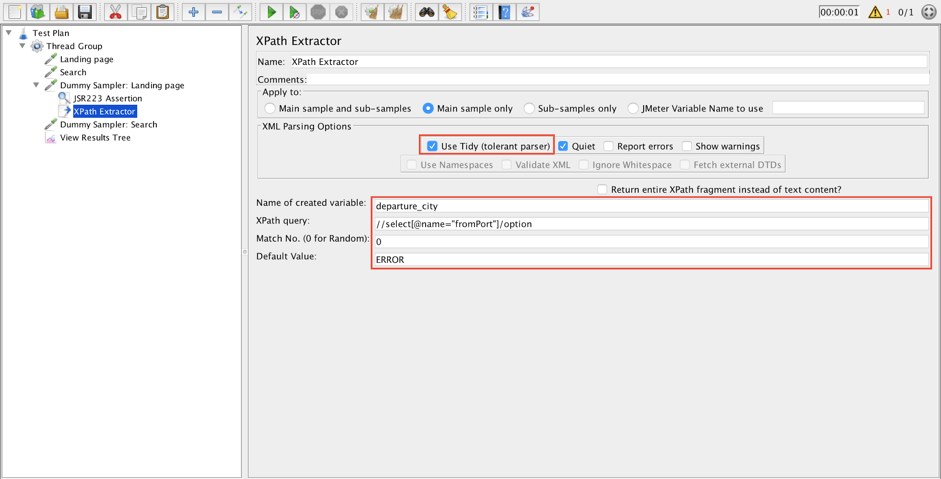 Fill in the following parameters:

This element will select a random option from the Departure city selector and save it to the departure_city variable.

12. We will use this extracted variable in the next dummy sampler for demonstration purposes. 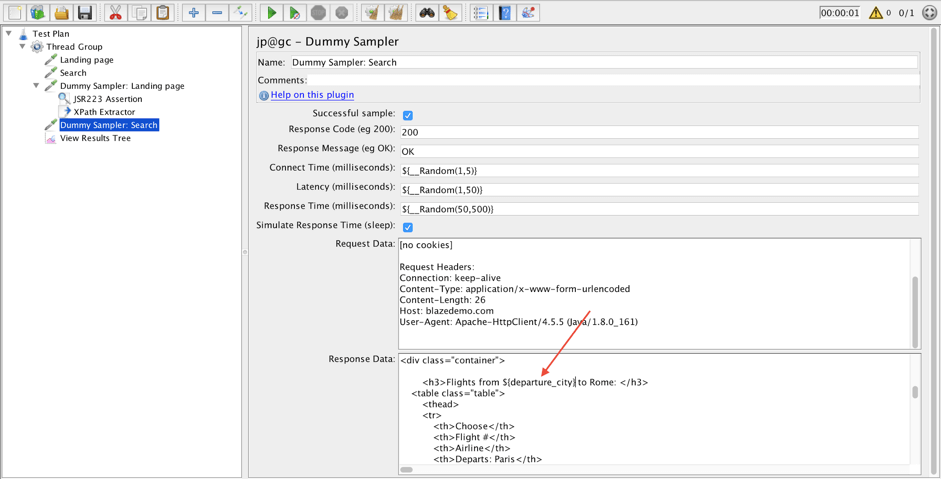 Locate the Response Data of ‘Dummy Sampler: Search’ sampler which is marked in the screenshot above and change the departure city from ‘Paris’ to ${departure_city}. 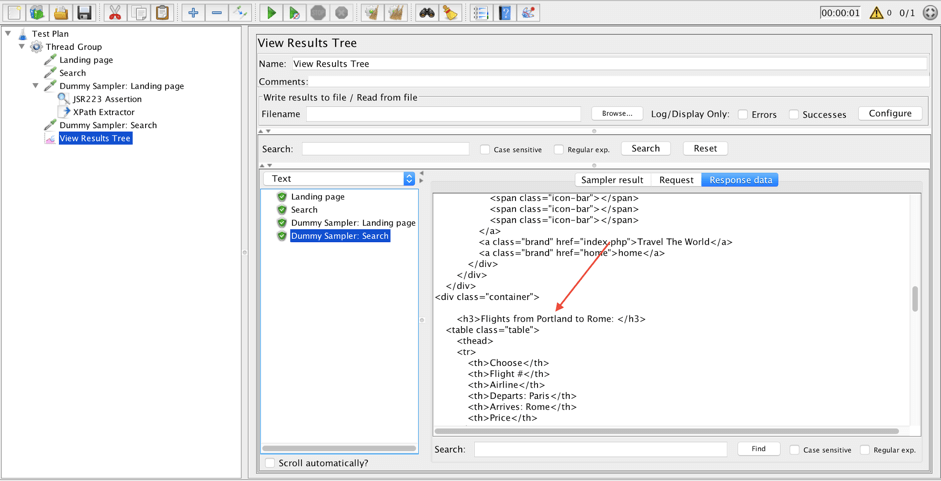 The XPath Extractor extracted ‘Portland’ as the value. (Please recall this is one of the elements we copied from the real sampler to the Dummy sampler).

Great! Now you can go back to XPath Extractor, play with it and make it more complex.

So! We took a look at how to mimic real requests, how to test assertions and how to test post processors using Dummy Requests. Of course, your usage of the Dummy Sampler isn’t limited to these examples. You can use it in any way you want.

After you finish debugging your test with the Dummy Sampler, you can run your first Sandbox test in BlazeMeter. Then, you can scale your test up to thousands or millions of users, and set the test to run from all over the world. 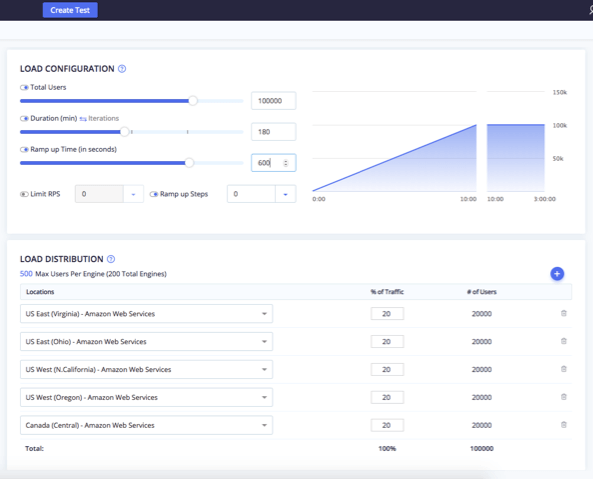 If you want to work with team members, you can create tests with them by collaborating in Workspaces and Projects together. You can also share the test reports with them and with your managers, and analyze KPIs in real-time or historically, in colorful and insightful graphs.

To start using BlazeMeter, put your URL in the box below and your test will start in minutes. You can also request a demo. 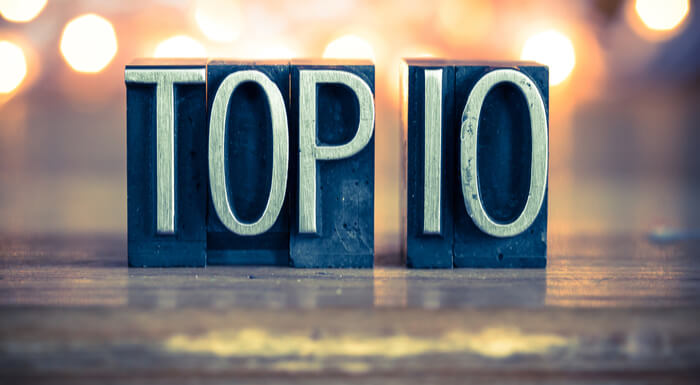