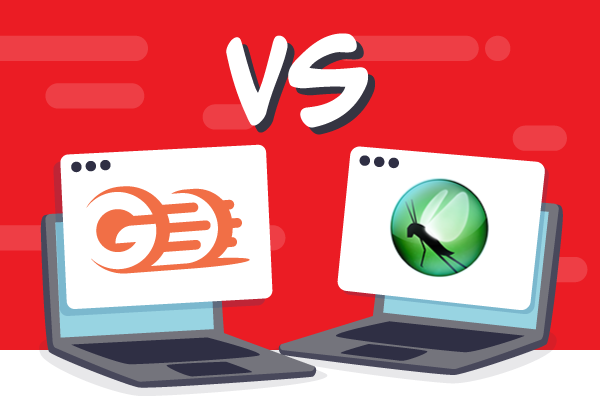 Gatling vs. Locust: What are the Differences and When to Use Them?

In this post we compare them according to multiple capabilities, like protocol support, script execution capabilities, and monitoring. We hope we can help you choose the right one for you!

What's the Difference Between Gatling vs. Locust?

Gatling is both an open source and a commercial performance testing solution. It is based on Scala, Akka, and Netty as its technology stack. Gatlingis an easy framework to implement your tests if you have some experience in Java.

Locust is an open source load testing solution. It is a more popular performance testing framework when compared with Gatling. The Locust framework is written with Python. It has an event-based implementation, so it is highly scalable. Thanks to that advantage, Locust is now being widely used and has a rapidly growing community.

Let’s look at a variety of different features and capabilities and see how the two solutions compare.

As mentioned above, Locust is an open source load testing solution. Therefore it is available at zero cost for anyone in the field. All users can access all the features directly. It is licensed under the MIT license. Gating provides an open source tool under the Apache License v2.0. There is also a commercial version.

Understanding the supported protocols of the framework you are using is important to make sure it fits your needs. If you are testing multiple protocols, choose the framework that supports the most protocols you need, or you might find yourself having to use different tools.

Locust, on the other hand, was mainly built for HTTP-based testing, but it can be extended to test other protocols as well. However, this requires some additional effort. If you can write up a custom Python function to test what you need, you will not have any issue.

This is one of the most critical factors that need to be considered when choosing a testing framework. The core value of load testing is to simulate the user load and exceed it. The exact number of users depends on the scenario and the application. Therefore the tool that you choose should be able to facilitate such different scenarios.

Since both Locust and Gatling have a command-line approach, they save resources that can be allocated for more users. Therefore, they both support a large number of users.

The Locust user simulation model is based on an async approach, which allows Locust to easily simulate thousands of users in a single device. Gatling handles virtual users, with each having its own data. Gatling implements them as messages so it can also handle thousands of concurrent users.

Ramp-up flexibility is also an important factor when performing extensive load testing, so you can see how much you can increase the load.

In Locust, when the server starts, you can give input elements to customize the load. Locust only supports a linear load. Therefore sudden spike loads cannot be tested with Locust. Gatling supports ramping up users with spike loads.

Generally, there are three steps in a performance test workflow:

The most time-consuming step of the workflow is the test creation step, because that’s where you capture all the requirements that need to be covered. The testing scenario needs to represent what happens when a user navigates to that particular application. Therefore it is necessary to allocate more time on test creation than on running and analyzing.

There are two ways to do testing with Gatling. One way is to use the simulation recorder which can be used to test UI elements. The recorder creates a Scala file which you can later edit if you want to add more functionalities to the test cases. However, if you want to test the product at API level you will have to write your own test cases. This can be done using domain-specific language (DSL) which is easily readable and writable. This DSL is based on Scala and it helps you to write test scripts with minimal knowledge of Scala. 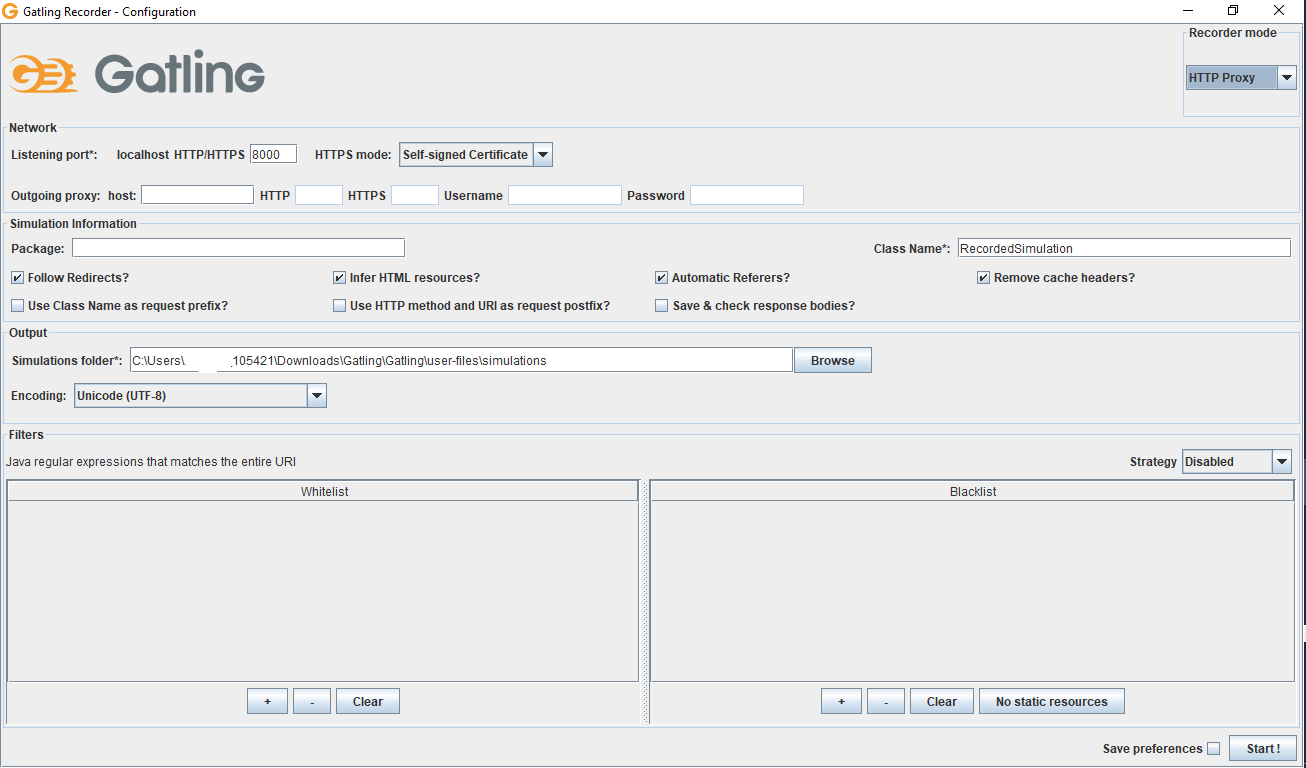 With the Gatling GUI, you can configure how the requests and responses need to be recorded. We will capture the basic options that we need to configure to perform a load test.

Following are the basic and most commonly used configuration options. You can find more advanced options here.

In Gatling, you can simply record the user journey through the selected application. One thing to pay attention to here is to model the user journey to reflect a journey of a real user. When the recording is terminated with the “Stop” option in the recorder interface, the simulation will be created in a separate folder.

in the Gatling installation location.

At this point, a simulation file will be generated that will look like below. 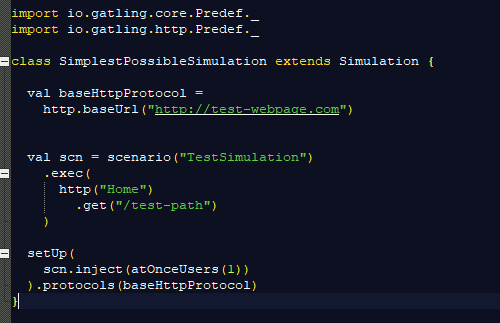 In this simulation file, you can further set up the configurations such as HTTP protocol, the number of scenarios to be considered and the details of each scenario. You can then execute it with Gatling to obtain the results.

Locust is a bit different from Gatling. It is all about coding. Therefore, you need to have basic knowledge of Python coding to create performance tests.

Writing test scripts for Locust is clear and comfortable, and much more powerful. However, it can be more complex for complicated tests. The reviewing also gets complicated. On the other hand, having tests in code format is much easier than in a GUI because you can easily add fixes for the tests. Code-level test implementation also gives you room to collaborate. Even the test execution process is simpler and faster when compared to a GUI-based testing approach.

As mentioned above, after creating and executing a test, you need to monitor the results. This is where you can see the results and check how your application is running.

In Gatling, when the simulation is completed, you can view the report in the browser. Gatling supports various types of reports as shown on this page. Gatling is capable of giving a visually descriptive analysis report. This is very convenient for grasping the key points of the analysis because it consists of different types of graphs and tables representing features of the executed tests.

Locust has a very limited monitoring capability, yet it provides almost all the information required for monitoring a basic load. There is a basic Locust web server that shows all the data available for monitoring. 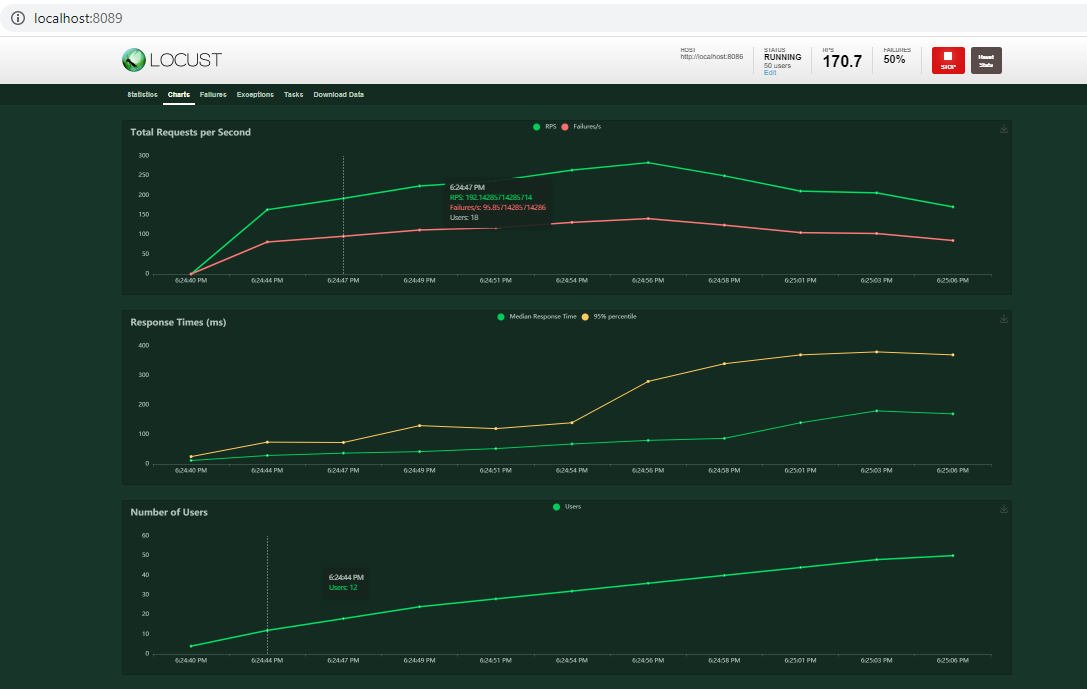 You can also run both test scripts in BlazeMeter and get advanced reporting, both in real-time and over time to see trends.

When we run a load test, we want to immediately see the results in the metrics that we chose, so we can customize them accordingly to capture more data or to tune the test. Each time we perform a load test, we need to optimize and customize.

Locust can provide real-time monitoring when it is linked with other tools to capture the metrics and to show the metrics. For example, you can use Locust to perform load testing, export metrics with Prometheus, and display them in a visually descriptive approach using Grafana dashboards. This also works with BlazeMeter.

Similar to the Locust approach, you can also integrate the Gatling framework with other open-source monitoring tools like Grafana and BlazeMeter.

Pros & Cons of Locust vs. Gatling

When to Use Gatling vs. Locust

Both Gatling and Locust can be used for load and perform testing. You can use Locust when you have limited resources, like CPU capacity. This is because Locust requires less CPU utilization when compared to Gatling due to its “more in code” aspect. You can use Gatling in scenarios when you specifically need a more descriptive illustration of the analysis report data because Gatling already has richer monitoring tools.

After you create your tests, you can run them both in BlazeMeter to achieve more scalability, advanced reporting options, and more. 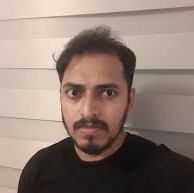 Classic is a senior software engineer who has experience in software development and software Automation. He has worked with many software testing tools such as Cypress, Selenium, Puppeteer, and JMeter. He currently works as a freelancer for several software development companies. He is also interested in sharing his knowledge with colleagues.