Jacob Sharir
Jacob Sharir is a manager in Broadcom’s DevOps group, With more than 7 years of experience in performance testing and customer-facing positions while leading a global team of technical experts, Jacob is proficient in the fields of Continuous and Performance testing. He is focused on assisting the Product team with exploring creative solutions, and increasing products’ value, quality and stability while helping customers improve their testing efficiency.

The practice of performance testing has been undergoing a makeover in the past few years. Agile development teams are adopting DevOps practices: more automation, more observability, and utilizing quality gates with more accurate testing, which are all contributing to improved decision making regarding our releases.

When testing, it might boil down to the question – should I release this new version while my performance test indicated degradation of performance? A performance baseline can help.

What is a Performance Baseline?

A Performance Baseline will be the performance criteria that the business accepts for the app or service in question. It’s also referred to as the Service Level Agreement (SLA). The different criteria which will be measured and enforced are the Service Level Objectives (SLO).

The baseline is a fixed starting point for comparison of future tests against it, serving the purpose of monitoring the app for stability, identifying regressions and enforcing the business SLA. Without it, the performance/non-functional testing team has no reference to measure against either during the release of a new version, or before critical events.

What is a Baseline Test?

A baseline test is a performance test that shows that the App-Under-Test is performing within the acceptable ranges of the SLOs, when it is tested with a specific load and scenario that simulates real-world behavior. That test will be the baseline test, and from now until a new baseline will be chosen, every future instance of that test will be compared against that baseline.

Who defines the SLA/SLOs? Typically, it will fall under the Product Management’s responsibility to decide. The testers should incorporate those SLOs, i.e those criteria that have been agreed on, into their test. This ensures it will be enforced and compared with whenever we’re running the same test again.

What are the Benefits of Having a Baseline Test?

Without a baseline test, you can run a test many times, and get proper reports with meaningful results. Using BlazeMeter’s Failure Criteria to fail the test when a certain Service Level Indicator (SLI) has breaching the SLO, e.g. Median response time over X Seconds, is very helpful in failing the test earlier when it presents sub-par performance.  Failure Criteria is even more accurate and contextual if you could fail a test based on the baseline’s SLIs as the criteria.

BlazeMeter also lets you set quality gates in a much more accurate way than before. Think of a test that runs on a certain cadence as part of your pipeline. Imagine how impactful it is to identify performance degradation at this early stage, way before any end-to-end tests are executed.

Configuring Your Baseline Tests in BlazeMeter

How to Create Your First Baseline Test

It’s a new app, a new test and you haven’t set a report as the Baseline yet. If you have a good guess of your target app’s limits, feel free to configure the test accordingly. However, if you are relying on the first test to shed some light on your baseline criteria, the best way to go would be to start small and increase the load from there. This can be achieved by starting a multi-test with 10-20% of what you believe might be the 100% that your app can handle, and adding load dynamically on the fly.

How to Set a Report as Your Baseline

Once you run a test and you believe you found your baseline, it’s very easy to set that report as your baseline.

Now you can configure the test according to this baseline.

One of the most important uses of the baseline will be the ability to fail tests if they breach the baseline’s Service Level Indicators (SLI). This is a more informative and contextual way to enforce the SLA of this use-case.

Go back to your test’s configuration page and scroll down to the Failure Criteria section. If you have your baseline report chosen, you will see that the Failure Criteria feature allows you to select your Threshold from the baseline. Check the respective box. You could also add or deduct an offset if you wish to set the criteria in a more forgiving way.

How to Compare Your Other Performance Reports with the Baseline Report

This is the main use-case for having a baseline. You’ll want to be able to compare instances of the same test, to a fixed and agreed upon baseline. The main purpose of the comparison is to see that the new versions are not breaching that baseline, hence, we’re not releasing code that will cause performance degradation.

There are three ways to compare your tests to their baseline:

1. Via the trends report - for a visual comparison per metric

This view lets you see how tests compare per metric to the baseline. This provides a good overview of your capabilities.

When viewing your test,  you’ll find a tab called ‘Trend Charts’ next to the History tab. This view allows you to visually compare all your reports for this test and observe their trends. You’ll see the Baseline indicated with a ‘B’ symbol.

Like in the example below, if the baseline test ran out of the scope of the current view (I’m viewing the recent 25 reports and my baseline ran earlier than that) then it will show up on the left, near the Y axis.

See how easy it is to identify which reports are over or under the baseline’s measurements. You can click on any of the dots to examine individual reports.

2. Via the requests stats report - for an in-depth comparison

This view enables you to drill down into the results of a test, examining all the different metrics, per label, and their respective baseline measurements.

When observing the Request Stats report, you’ll find a toggle button called ‘Show Baseline Comparison’. Toggle it on. You will see a comparison to the baseline in percentages, next to each metric, per each test label.

3. Via the Compare Reports feature - for a refined comparison

The Compare Reports feature is not new, but we did set up a quick shortcut to get your current report compared to the baseline. You can now see a comparison between the current report, and the baseline report, per Metric, You can also refine the comparison to be based on a certain label. 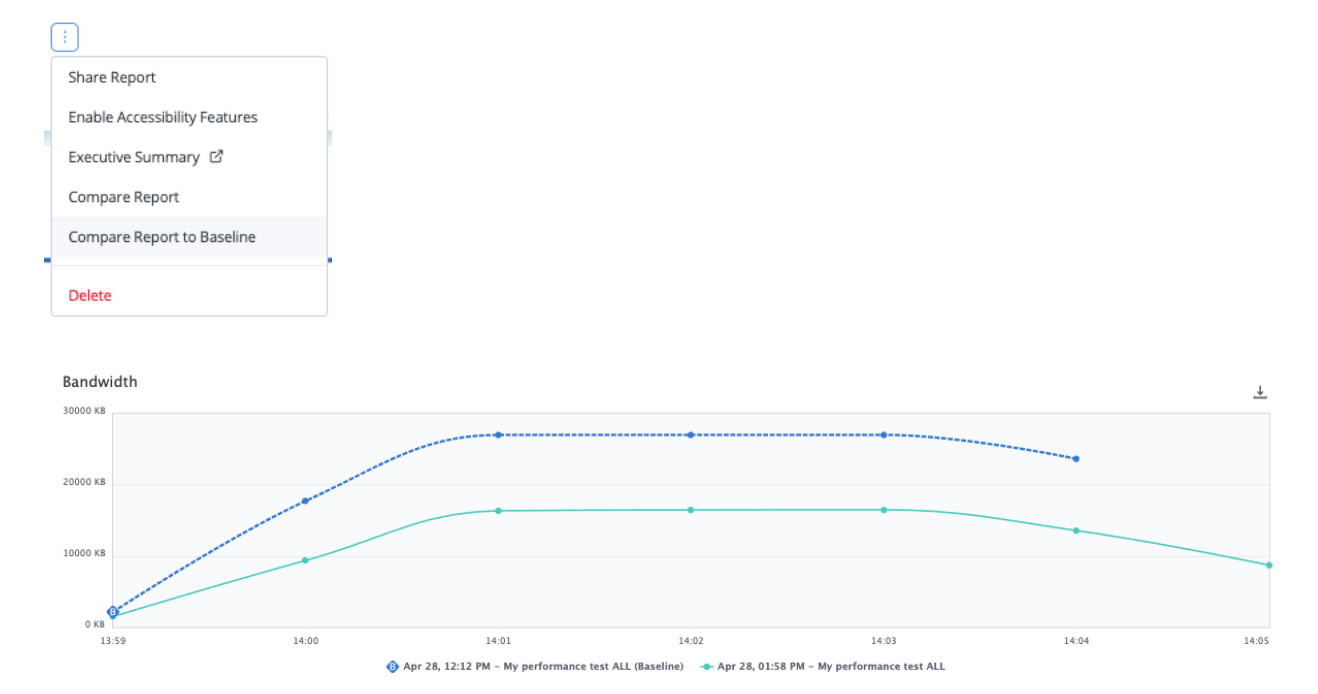 That’s it! BlazeMeter enables you to provide better service to your customers by enforcing SLAs built-in to your performance test. To get started for free, click here.