The HTTP Proxy Server automatically adds the HTTP Header Manager to each request. This manager is the magic lasso that contains and maintains the HTTP headers that are sent to the server from the browser in use for scenario recording.

The Solution - The HTTP Header Manager

The only interesting feature here is that the HTTP Header Manager allows the user to save headers to *.jmx file. But this file is not in an XML format as is the usual JMeter test plan. It contains plain text, as displayed below. 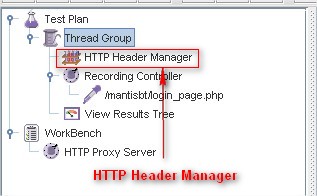 The last example will be more interesting, because it will show how JMeter merges headers from different managers.

JMeter has captured headers from the latest manager via the testplan, but nothing was altered in pre-existing headers.

Learn more about JMeter from our free Webinar "How to Make Performance Testing with JMeter Simple".