Igor Bobriakov
Igor is a data Scientist and ML Engineer and the founder of the Data Science School.

Selenium IDE is an open source test automation tool that can record and playback your actions on the web. By using it, you can automate tests for web applications. Thanks to its convenient features, manual testers who have to repeat their test scenarios are benefiting from the tool. This article shares seven important Selenium IDE tips so that you can use the software more efficiently and ensure the quality of your code.

What is Selenium IDE?

Selenium IDE is a tool for recording browser interactions for test cases. This open-source testing tool is easy to install and start: you can just download the tool as a plugin into your web browser, like Chrome and Firefox. Using the tool, you can create simple or complicated test scenarios. Like other dev IDEs, you can set breakpoints, pause, and check variables when an error occurs. Plus, you can use your test case again inside another test case, which makes repetitive testing easier and faster. Selenium IDE understands conditional statements such as if and while. This logical handling lets you expand and cover more various test scenarios. Besides these features, Selenium IDE can also perform:

We learned that Selenium IDE is such a powerful tool. When you can utilize it properly, you can boost your productivity and ensure quality. Let’s dive into seven important tips for using Selenium IDE.

There are many commands you can use in Selenium IDE. Although it is not possible to memorize them all, getting familiar with the most essential and frequent commands can help you save time and reduce mistakes. To add the command and target, create your project first and find the inputs as the screen capture below. 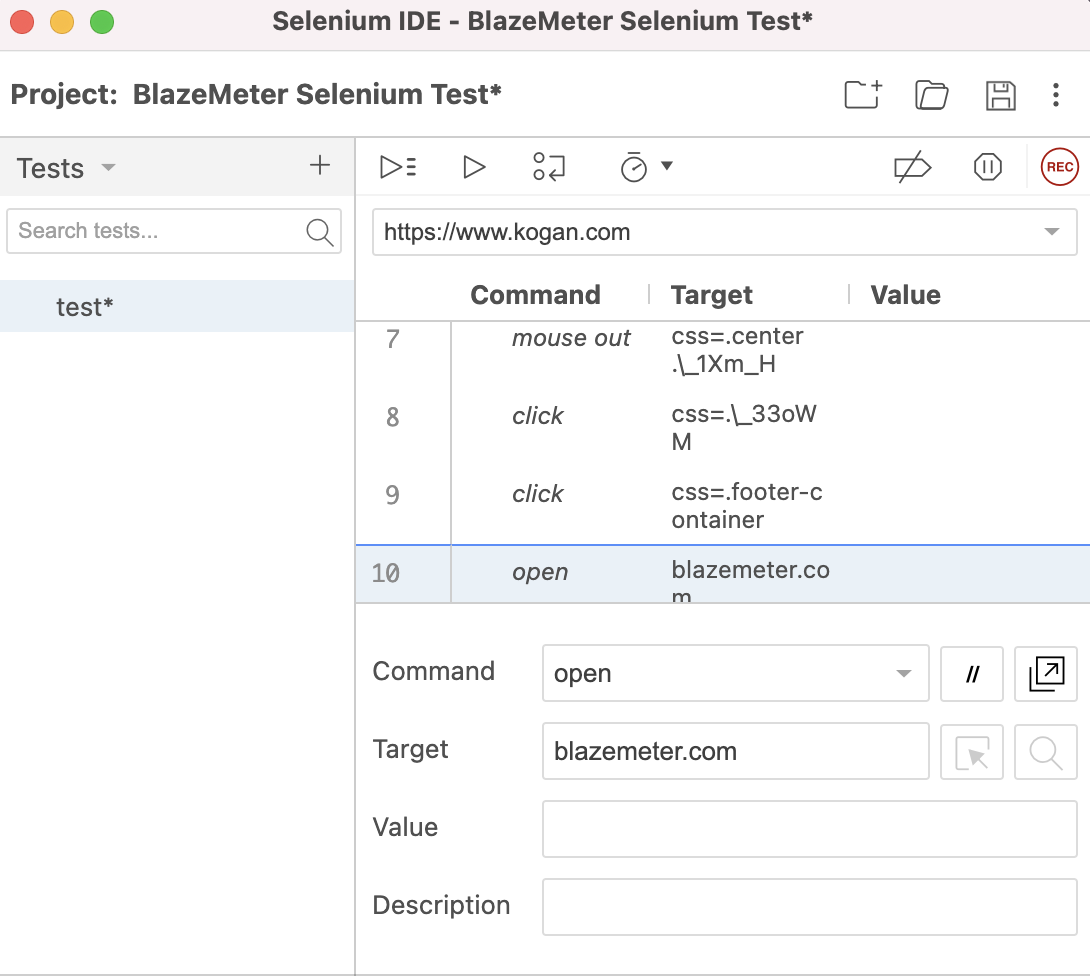 The commands below are some of the most essential ones that you would use frequently. Getting familiar with them will help you to speed up creating a project.

These commands are some of the most frequently used commands in Selenium IDE. Knowing commands lets you understand what Selenium is capable of. Keep this list of commands handy and refer to them whenever you want to know if certain actions are possible.

Since you can use Javascript in Selenium, you can also access its string handling functions. Here are five useful functions. While the commands above are Selenium-native and more for selecting values, String manipulation by Javascript gives you an ability to manipulate selected values and provides an immense flexibility in what you can do using the programming language.

You can select part of the string using the substring function. For example, let’s say we have a string, “Hi, my name is David” and we want to extract “David”. Then you can use the following substring.

This command will run the Javascript code and store the result, “David”, in the name variable. When we use one index in the substring function, it will start at that index and select until the end. If we want to specify the start and end indices, you can use str.substring(15, 20).

You can replace a matching word with a new word. Let’s say we want to replace the name, “David”, with “Peter”. Then we can use the following command.

The split function converts a string into an array split by a defined value. Using the same example, if we want to extract “David”, we can use the function as below.

This will give you “David” as it stores at index 4 in the array.

When you want to concat two strings, you can do so by the concat function. The sample code below shows how to use it.

Lastly, the trim function is also useful when you want to remove left and right-padded spaces.

These string handlings are part of the all string functions in Javascript. Although these are not all of them, it will be enough to demonstrate what you can do with string functions.

Xpath is an important feature that lets you select the value of an HTML element. When you get used to its syntax and build experience, you can access most of the HTML assets giving you a capability to run more detailed tests. In Selenium IDE, you can use Xpath to point to an element. By utilizing Xpath, you can reach almost all elements in an HTML page easily and programmatically as well. Get yourself familiar with Xpath syntax and the capabilities of it then, when you know what you can do, you can build more efficient testing plans.

Let’s start with understanding the syntax structure. If we break it down by each elements:

It will be easier to understand it by looking at some examples. The example below points to a tag that has a link to the Google website.

The asterisk below makes this point to any element that has the id value of a surname.

You can use ‘and’ or ‘or’ condition in Xpath. The example below selects an element that has an ‘email’ type and has ‘first_email’ as an element’s name.

In Xpath, you can use string match syntax like below. The Xpath below selects all input elements that contain “email” for name. For example, if elements have a name such as “email_01”, “email_02”, and “email_03”, they all contain “email” thus all will be selected.

Xpath also has various syntax and features. Making yourself familiar with Xpath will certainly give you more testing capabilities.

Instead of using hard-coded data inside your test code, reading data from external datasets in csv can help you prevent dependent tests and manage your test scenarios more efficiently. To read CSV files, you will need to install the Selenium IDE extension by UI.vision.

The CSV format can be a good choice to have a central dataset and use it across different test cases. You can use the csv read command as below.

Then, the imported csv data can be read by ${importedCsv[row][column]}. The values read from the csv file can be inserted into HTML input elements for testing.

To hone your skills of Xpath and string handling, it is better to face diverse scenarios. If you keep using similar test cases, your scope of skills can be limited. There are two websites that let you learn Xpath and practice it online.

If you have difficulty in building Xpath even after learning and practicing, you can rely on your Chrome extensions that automatically generate Xpath. One example is XPathMax. This extension creates a Xpath when you click an element.

Selenium IDE itself is an extension to your browser. However, by installing other extensions, you can enhance Selenium IDE’s capabilities. You can check each browser’s market place to find a plugin that suits your needs. What’s interesting is you can make other plugins communicate with the IDE via the WebExtension standard. This is an important and unique feature since not all testing plugins allow this. With this feature, you can expand the capabilities of Selenium IDE. For example, you can call the IDE through the Selenium IDE API using browser.runtime.sendMessage. The following code can be executed to call an API.

SIDE_ID refers to the IDE’s extension ID that can be found here. In request, you can put a payload like below.

The uri refers to a resource locator in the IDE and the verb field is a modifier function. You can build more sophisticated interactions as your use cases become advanced. This guide will be a good starting point.

This article discussed the concept of Selenium IDE and provided seven essential tips. Although we talked about a single tool, it needed different types of skills such as the commands, string handling, Xpath, and WebExtension. Learning all these without any support may be a burden. Check BlazeMeter. The BlazeMeter blog shares ample knowledge about automatic and continuous testing. The platform also provides a powerful testing solution for users to save time and cost and to maintain their testing environments easily. To find out more, start a free trial today.