This story was written based on our experience working with multiple QA team leads across many industries. It does not depict a real person or testimonial.

You may remember my previous blog where I started looking into test automation, and how I evaluated BlazeMeter.com. After recording, the test gets broken down into its building blocks and opens in the Scriptless Scenario Editor, where I can edit and debug it. 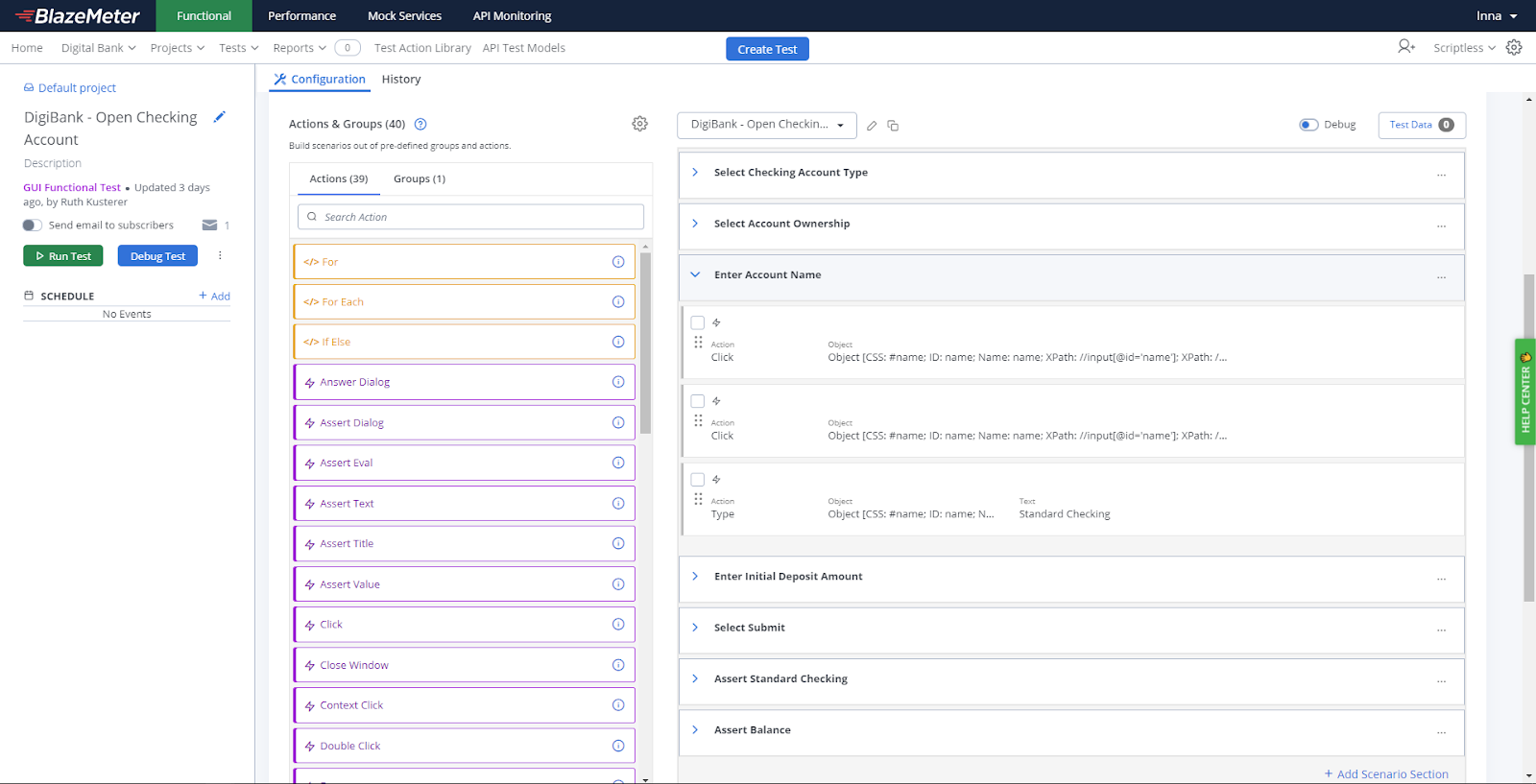 (It's called "scriptless" because the tester does not need to know any scripting language to create or edit the building blocks of tests. BlazeMeter creates and maintains the scripts in the background.)

Now we come to my "favourite" part of test creation -- debugging... Do you ever debug a script, and it fails simply because it tried to log in, but you were already logged in?

Well, it started happening more often when we started editing and debugging tests in the scenario editor regularly. Do I really have to log off every time before starting another debug session? We first thought we could save time by starting the debugger manually at the first step after the login part. Even though we liked the flexibility that BlazeMeter's local debugger gave us, this workaround was not an ideal solution.

I should mention that BlazeMeter can debug your tests in two different ways:

I had followed the recommended best practice and had saved the login procedure as a reusable Action Group. I found myself staring at the Groups tab, pondering a more robust approach against these unnecessary login hang-ups.

What options does the Scriptless Scenario Editor offer to skip unnecessary steps under certain conditions? I switched over to the Actions tab and took stock. 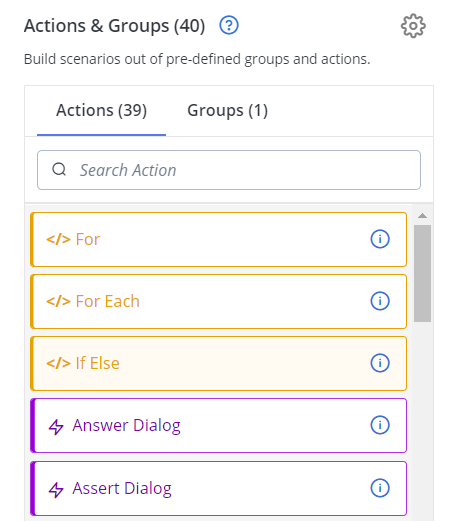 I spotted the "If Else" Action and had an idea. Seeing that scenarios support conditional statements, I knew I could use a little scripting trick to work around my login problem. I needed to model the following condition:

I only needed to find a suitable test to identify whether I was on the login page. I saw the Store Title action and tried to store the page title in a variable, and compared the titles of the pre- and post-login pages. But I realized they had the same title, so in this case I could not use this method to determine on which screen I was.

My second idea was to look for a unique object that was present on the login page, but not on any other pages. What about the Username input field? I entered

as the If condition. Eureka! This simple JavaScript line turned out to be a reliable way of detecting the login page of my web app. Now all that was left was dragging and dropping my login steps into the Then part of the condition, and leaving the Else part empty.

What does this "scriptless script" look like in the Scenario Editor? 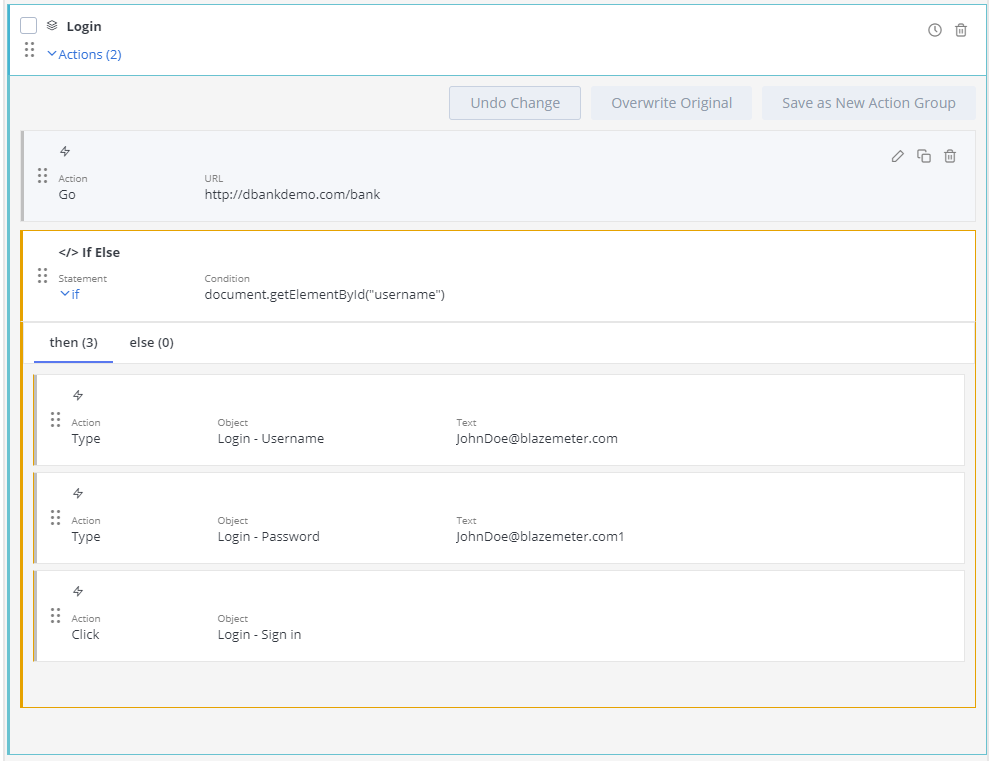 Since I previously had told my team members to use my reusable Login Group, they benefited from this change as soon as I saved and updated the Group. You see how using Groups for common procedures is a big time saver, especially in preparation for future changes. When the login page gets redesigned, I'll just update the reused Group once to update this procedure in all tests.

Rerun the a Test With Different Permissions

If-else Actions go very well with reusable Action Groups. Our two longest tests are practically the same for admin users and basic users, and have a lot of reuse. I basically run the same test twice, just for two different users with different permissions, and invoke different assertions. For Admins I want to assert that the "Delete" button is available, and for users that the "Request Deletion" is available instead.

Recently I figured out a way to run the same test multiple times, with different test user credentials, and branch where the paths diverge, by iterating over test data in a spreadsheet! 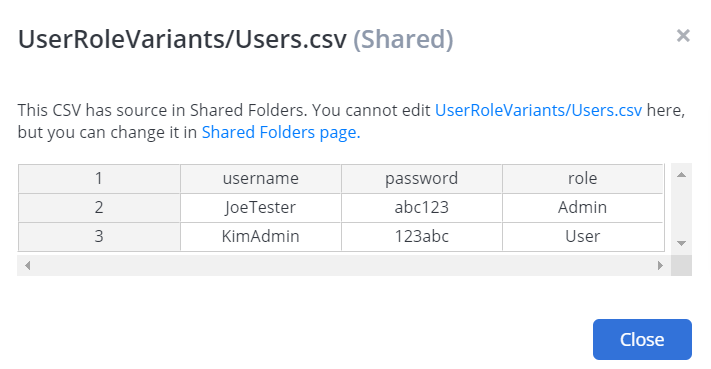 I uploaded the Users.csv spreadsheet to our Shared Folder, so it would be available for all tests that use these credentials. By attaching a spreadsheet to my test, I can use the data iterations feature, where BlazeMeter runs the test repeatedly, once for each row in the spreadsheet.

My business logic is: